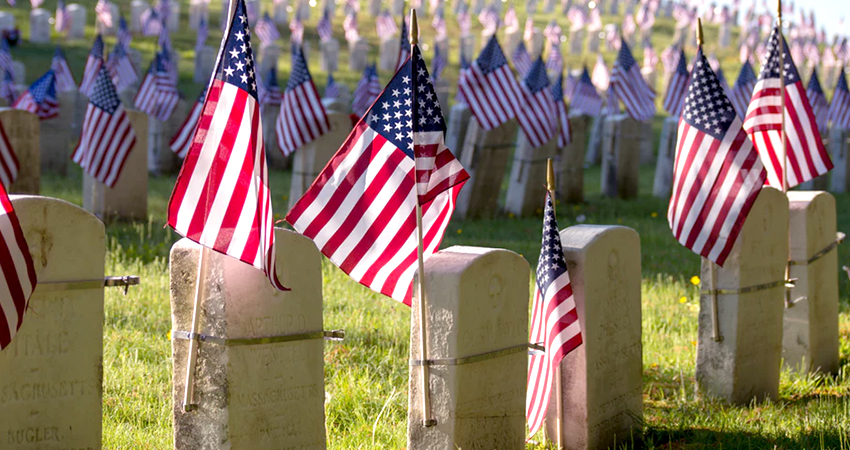 First and foremost, Memorial Day carries a very solemn and deep meaning as the holiday takes its origin from the Civil War commemorations.

The battles and mass killings of soldiers during the war brought sorrow and unfilled emptiness of the loss to the whole country. Eventually, the war outcomes provoked the laying of flowers on the graves of the dead soldiers from both sides. Now, Memorial Day is a federal holiday, celebrated on the last Monday of May, which literally is a day to remember the fallen men and women while serving the USA. We prepared the number of interesting facts about Memorial Day that will help you to embrace the true meaning of the holiday.

Memorial Day was first known as a Decoration Day due to the tradition of decorating the graves with flowers or wreaths. The tradition is much older than the Civil War and was pursued before it and during the war. Although the day got its official name “Memorial Day” in 1967, it is still known and called as Decoration Day in some states.

The tradition was first observed in the Southern States. General John A. Logan decided to expand it across the whole country and made a proclamation to establish Decoration Day as a day to commemorate the fallen soldiers every year. The holiday was first celebrated on May 30 as that is the period when flowers burst into bloom.

The holiday has its offshoots in the Southern States when people commemorate the Confederate soldiers. So, apart from the federal Memorial Day, Alabama has Confederate Memorial Day on the fourth Monday of May, Mississippi – on the last Monday of April, Georgia – April 26 and Louisiana and Tennessee – April 3.

The observance of the traditions

Apart from the laying flowers and flags on the graves, this day has some other customs, which are maintained annually.

The American flag has to be raised to the half-staff till noon and after that to the full-staff, which represents the lives sacrificed by thousands of men and women honored at noon.

Another typical tradition of this day is the annual Memorial Day Concert held on the lawn in front of the United States Capitol. Together with the numerous parades all over the country, this performance is another way to pay the respect for the dead soldiers.

On Memorial Day there is the traditional automobile race Indianapolis 500 taking place at the Indianapolis Motor Speedway, which is one of the ways to celebrate this holiday.

Memorial Day is not simply the federal holiday or another opportunity to get the first sunbath, or go shopping; it is a huge part of our culture and our unity as nation, so let’s appreciate it and on the last Monday of May honor the memory of those who sacrificed their lives so that our country could live and flourish.

How to Write a Winning Scholarship Essay

Blog categories
Why we are # 1

Get your paper with

for your first order!